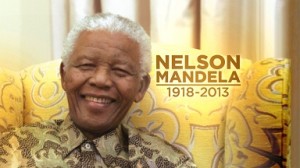 Nelson Mandela once said, “I learned that courage was not the absence of fear, but the triumph over it. The brave man is not he who does not feel afraid, but he who conquers that fear.”

December 5, 2013 marked the passing of one of the greatest representatives of freedom and democracy of our time. The entire world watched the televised memorial service in rain-soaked Soweto. The tone was of joy and the theme celebrated the life of a truly remarkable man. 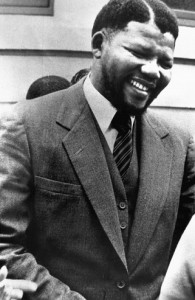 Let’s take time to learn more about one of the 20th century’s greatest figures: Rolihlahla Nelson Mandela, a political activist and statesman who became President of South Africa.

In this month’s Internet Challenge, we will get a glimpse into Nelson Mandela’s life.

Born in Qunu, Transkei, South Africa on July 18, 1918, Mandela, as a young boy, was expected to be a chief of his tribe one day. As he grew up, Mandela was determined to become a lawyer and dreamed of making his own contribution to the freedom struggle of his people, the racial inequality in South Africa. We will learn more about his life as a participant in the African National Congress, a survivor of twenty-seven years in prison, and eventually as President of South Africa.

Through his example of continued tolerance and idealism, we will see how influential Mandela was, not only in fighting oppression in his homeland, but all around the world. Let’s begin our online activity. Our first Web site to explore is TIME Magazine’s ‘Obama Honors Nelson Mandela: ‘His Triumph Was Your Triumph’. Next look at the many magazine covers that featured Mandela over the years (Note: Mandela along with then-President F.W. De Klerk were named by TIME Magazine as ‘Man of the Year’ in 1993). Continue with the Nelson Mandela Foundation Web site and interactive timeline.

Answer the first set of questions.

1. In the revolution led by Mandela to transform a model of racial division and oppression into an open democracy, he demonstrated that he didn’t flinch from taking up arms. What is an antonym for the word “flinch”?

2.  Mandela’s childhood prior to his father’s death was volatile. 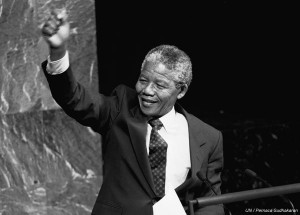 3.  What is the word that means “an official policy of racial segregation formerly practiced in the Republic of South Africa, involving political, legal and economic discrimination against the nonwhite population”.

4.  Explain the type of strategy in which Mandela believed.

5.  What major change took place at Robben Island when Mandela was a prisoner there? 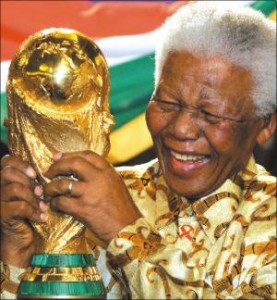 6.  Give your explanation of Mandela’s speech:

"During my lifetime I have dedicated myself to the struggle of the African people. I have fought against white domination and I have fought against black domination. I have cherished the ideal of a democratic and free society in which all persons live together in harmony and with equal opportunities. It is an ideal which I hope to live for and to achieve. But, if needs be, it is an ideal for which I am prepared to die."

8.  After Mandela became the first-ever democratically elected president in South Africa, he did not encounter any problems in governing his country.

9.  Name three qualities that Mandela demonstrated in which he believes are “attainable by humanity as a whole”.

10. On the January 1994 TIME cover, why do you think F.W.de Klerk is shown as a peacemaker along with Nelson Mandela? 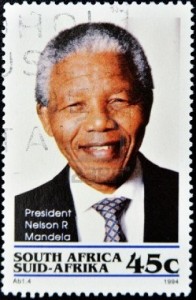 The next site we will visit is Nobel Prize.org. Nelson Mandela and F.W. de Klerk were both awarded the Nobel Peace Prize in 1993. Go to the site below and read the biographies for each man. Read the press release that was distributed by the organization. Go to http://nobelprize.org/nobel_prizes/peace/laureates/1993/index.html.

11. You have been assigned to present a ‘World Peace’ award to Nelson Mandela and F.W. de Klerk. What would your speech say? Write a one or two paragraph speech about these two men and their accomplishments. After you are done, be prepared to present it to your teacher and classmates. Talk about it!

Let’s go to the PBS site The Long Walk of Nelson Mandela at www.pbs.org/wgbh/pages/frontline/shows/mandela/.

Click ‘Anecdotes’ at the bottom of the page. Read the second article (by Richard Stengel). It starts out “There’s a story and it’s not related to prison”. Read all three paragraphs.

12.  Nelson Mandela admitted that he was scared during that airplane flight but never showed his fear to Stengel. Mandela indeed showed courage during that airplane’s malfunction. How did Mandela’s courage influence Stengel? What does courage mean to you? How do you show courage to others? Write your own response or create your own poem about courage and share it with your teacher and classmates. 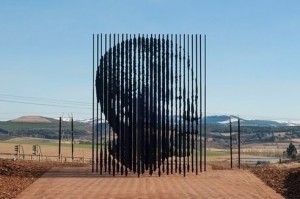 Explore the sites below and use them to complete the extension activities.

Activity #1. If you had a chance to meet Nelson Mandela, what three questions would you ask him?

Write them down and be prepared to discuss them with your teacher and classmates. Talk about it!

Activity #2. You are in the Art Department for a local magazine company. Nelson Mandela will be on the next issue’s cover. How would you design it? Using appropriate computer software or paper, pencil, and art tools, design your own magazine cover. After you are done, present it to your teacher and classmates.

After you are done, share it with your teacher and classmates.

Activity #4. Take a virtual tour of Robben Island. What do you think it was like for Nelson  Mandela and the others when they were imprisoned on that island? How do you think Mandela emerged from prison life as a mediator, philosopher, and president-in-waiting?

Write down your thoughts and be prepared to support your opinions with your teacher and classmates.

Activity #5. Create a fact/fiction/opinion statements chart on Mandela’s life. Using appropriate computer software or paper, pencil, and art tools, design a chart that would include three facts, three fiction statements, and three opinion statements about Mandela. After you are done, present it to your teacher and classmates. Ask students to give their feedback for each statement.

Congratulations! You have done an excellent job completing this Internet Challenge.

2.  (b) False. Mandela’s boyhood was peaceful enough, spent on cattle herding and other rural pursuits until the death of his father landed him in the care of a powerful relative, the acting regent of the Thembu people.

4.  Mandela opted for nonviolence as a strategy. He joined the Youth League of the African National Congress and became involved in programs of passive resistance against the laws that forced blacks to carry passes and kept them in a position of permanent servility.

5.  Mandela’s major response to the indignities of prison life was a creative denial of victimhood, expressed most remarkably by a system of self-education, which earned Robbins Islands the title of "Island University." As the prisoners left their cells in the morning to toil in the extremes of summer and winter, buffeted by the merciless southeaster or broiled by the African sun, each team was assigned an instructor in history, economics, politics, philosophy, etc. Previously empty recreation hours were filled with cultural activities.

7.  Mandela was escorted, in the greatest secrecy, to the State President’s office to start negotiating not only his own release but also the nation’s transition from apartheid to democracy.

8.  (b) False. Tormented by the scandals that pursued his wife Winnie, from whom he finally parted; plagued by corruption among his followers; dogged by worries about delivering on programs of job creation and housing in a country devastated by white greed, Mandela has become a sadder, wiser man.

9.  Mandela proved through his own example that faith, hope and charity are qualities attainable by humanity as a whole.

10. Not only did F.W. de Klerk work with Mandela in negotiating his own release from prison, he also collaborated with Mandela on the nation’s transition from apartheid to democracy.