The Hawaiian Monk Seal: Dog That Runs in Rough Waters 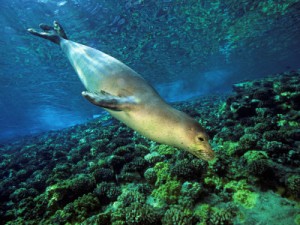 An animal’s eyes have the power to speak a great language.

In this month’s Internet Challenge™, we are going to learn about a critically endangered species that is also is distinctive for being an Hawaiian native: the Hawaiian Monk Seal, the State’s official mammal. While most seals prefer cooler climates, this rare seal prefers warm, sandy beaches of the northwestern Hawaiian islands.

How did this animal get its name? The monk seals were named for the folds of skin on their heads that resemble a monk’s hood. Another reason is because the seal is usually seen alone or in small groups.

Hawaiian monk seals have been swimming in the oceans and coral reefs of the Hawaiian Islands for the past thirteen million years. Unfortunately, this seal’s population has been decreasing since 1989 and is headed toward extinction. There are only about 1100 of them left.

Let’s learn more about this animal, its habitat and ways of living, along with the challenges it faces co-existing with man in the 21st century. In addition, we will also learn about organizations with goals of protecting our oceans and the wild species in them. The Hawaiian Monk Seal is unique to Hawaii; we cannot allow this animal to become extinct. We will understand that it is indeed a privilege to “see” the Hawaiian Monk Seal.

Are you ready to begin our online activity? 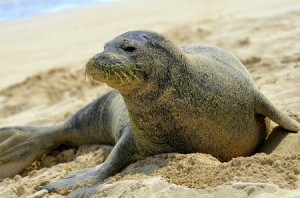 Our first Web site is the “Waikiki Aquarium” that is located at http://www.waquarium.org/hawaiian-monk-seal-habitat.html

Read the information on this page and then answer the following questions.

2. Why do you think the monk seal’s population continues to decline? Give some facts along with your own reasons. 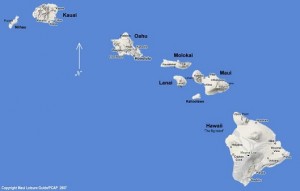 Zoom over to  “Hawaii Wildlife Fund” that can be found at

4. How do mother monk seals nurse their pups?

5. How do volunteers help in the Maui Monk Seal Watch? 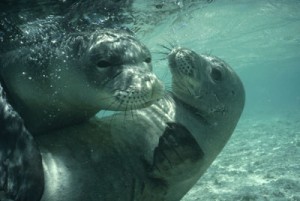 Our next Web site is “Marine Conservation Institute” at

Read the material on this page and answer these questions.

6. (a) To which other part of Hawaii is the monk seal expanding? (b) What concerns are there in regard to this expansion?

Now, with teacher permission, watch the short 10-minute video, “A Privilege to See” that is displayed on that Web page. Take notes along the way and complete the following.

7. You heard many people talk about their thoughts with regard to the monk seal. Which one(s) were most significant to you? 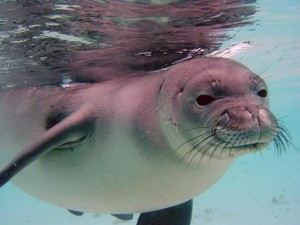 Zoom over to “Defenders of Wildlife – the Hawaiian Monk Seal” at

Read the information on this page and then answer the questions below.

9. In your own words, describe the appearance of the monk seal and their movement in the water.

10. The Hawaiian monk seal evolved in an area without people or other land predators. Therefore, it did learn to fear people and can attack.

* Go to any of the Web sites below to gather more material about the Hawaiian Monk Seal.

You have been asked to give a presentation to a local animal nonprofit organization in your community. Some of its members will be traveling to Hawaii and want to know about the monk seal.  How would you create your group presentation and what type of information would it contain?

“My Hawaii Nature Journal” (and listen to the monk seals talking!)

* On our cyberspace journey, we read that Bill Gilmartin, co-founder of the Hawaii Wildlife Fund and Director of Research, supports a plan to build a monk seal rehabilitation center in NELHA, Hawai'i Island.

http://www.wildhawaii.org/marinelife/seals.html (scroll down to the bottom of the page)

How would you design a monk seal rehab center?

Use paper and pencil (and art tools) or appropriate computer software to design your facility. After you are done, be sure to share it with your teacher and classmates. Talk about it!

Topic: Isolated from their closest relative 15 million years ago, Hawaiian monk seals are considered a "living fossil" because of their distinct evolutionary lineage. Part of the "true seal" family (Phocidae), they are one of only two remaining monk seal species (Mediterranean and Hawaiian). The Caribbean monk seal is extinct.

How can we educate the next generation of men, women and children – and also future environmental advocates – about this urgent need to save our seals? How can we protect the Hawaiian and Mediterranean seals from extinction? What ideas do you have?

Read, Watch, Write and give your View!

* Go to “Office of Protected Resources – NOAA Fisheries” and scroll down to the bottom of the page. You will see an eight-minute video entitled, “Good Neighbors: How to Share Hawaii’s Beaches with Endangered Monk Seals.”

Watch the video – with teacher permission – take notes. After you are done, write your thoughts as to how man can be a good neighbor with monk seals.

Give your point of view in a one-page report or summary for how the next generation can/should be inspired to be active stewards of our planet. After you are done, be prepared to share it with your teacher and classmates. Talk about it!

1. (b) False They are solitary animals or are in small groups.

2. Student’s own answers. The monk seals’ main predators are tiger and Galapagos sharks. Since the monk seal lives a solitary life, it might not have as much protection from the sharks. Most pups are born in April and May – warm weather when predators may be more active. Sadly, the monk seals’ deaths in recent years have been attributed to entanglement in marine debris. Our oceans are getting cluttered with garbage, which can be fatal to the monk seal.

4. The monk seals come up onto land to rest, and to give birth and nurse their young. They are very sensitive to human disturbance at their haul-out sites. Mother monk seals nurse their pups on the beach for approximately six weeks and must not be disturbed.

5. In addition to teaching hundreds of visitors each year about Hawai'i's monk seals, Hawai'i Wildlife Fund coordinated the Monk Seal Watch on the island of Maui, 1996-2007. When monk seals haul out onto the beach to rest, Monk Seal Watch volunteers place police tape around the area and stand by to educate the public, ensuring the animals are not harassed while they rest.

6. (a) Most Hawaiian monk seals can be found around the northwestern Hawaiian islands (NWHI) in the Papahānaumokuākea Marine National Monument, but a small and growing number now live in the main Hawaiian Islands (MHI).  (b) The overall population is declining, but the increase in the main Hawaiian Islands is promising for the future of the species. With more seals in the human populated islands of the Hawaiian Islands, more people will interact with the seal. Efforts to help humans and seals to co-exist with each other are important for the recovery of the species.

7. Students’ own answers. Some suggestions: It is a privilege to see a monk seal. Life begins in the sea; the monk seal is our ancestor. Respect all life. The seal’s place is in the water; we should not bother them.

8. The monk seal would lose its connection to the wild and become dependent upon man for food. This would be a terrible loss for both seal and man.

9. Hawaiian monk seals are known as the "most primitive of living seals." They are dark gray on their backs and silvery gray on their stomachs. They have streamlined bodies, which make them good swimmers. Their front and back limbs are flipper-like. The front flippers, which have five digits, are smaller than the back (hind) flippers. The hind flippers cannot be turned forward, so to move on land, the seals must wiggle them.  In the water, Hawaiian monk seals propel themselves by moving their hind flippers and using their front flippers as rudders.

10. (b) False The Hawaiian monk seal evolved in an area without people or other land predators. Therefore, it did not learn to fear people and is easily approachable and disturbed.