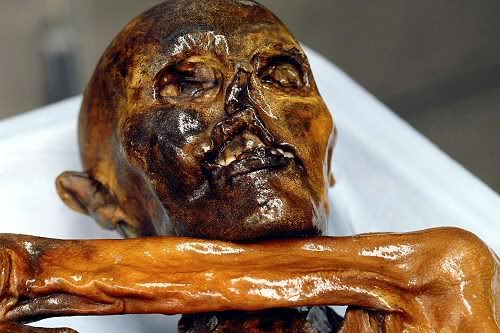 In 1991, when walking near a melting glacier on the Otztal Alps in South Tyrol, at the border of Austria and Italy, tourists Helmut and Erika Simon noticed something they could not identify. Moving closer, they began to panic when they realized what they had found. It was not a discarded piece of worthless matter as they had expected. It was a human corpse lying with its chest against a flat rock.

The couple could hardly have imagined the importance of their discovery or the far-reaching effects it would have on both the world of science and history in general.

Named for the place where it was found, the mummy would become known as Otzi (also spelled Oetzi) the Iceman. Though it was originally thought to be modern, when taken to Innsbruck, its age was determined to be about 5,300 years old. This made Otzi one of the world’s oldest and best preserved mummies. 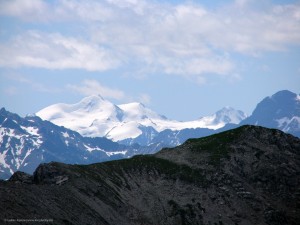 The Iceman’s clothing and possessions have given scientists a better look at what life was like during the Neolithic Age in Europe. As a result of the most up-to-date testing, scientists have determined that Otzi weighed approximately 134 pounds, was likely to have been in his 40’s, and was about five foot three inches tall. They surmise that he was probably one of the eldest members of his community.

Though the mummy was fully clothed when he died, much of his apparel had fallen apart by the time he was found. When his body appeared from the ice, the back of his clothing was badly damaged. However, because he was laying face down, substantial parts of his clothes were preserved. 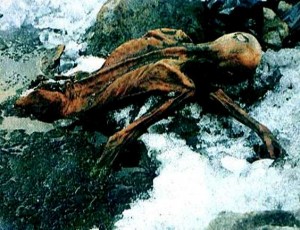 Otzi’s clothing list was quite extensive. He wore a pair of shoes, a goatskin coat, a bear fur cap tied with two straps, two goatskin leggings, a goatskin loincloth, and a woven grass mat (for protection from the rain and cold and worn most likely over his head.)

Surprisingly, Otzi’s clothes reflected a level of sophistication. For instance, his shoes were wide and waterproof, a feature that was particularly important when walking across snow. The soles were made of bearskin while the top panels consisted of deer hide and a netting derived from tree bark. Additionally, soft grass was place around the foot and inside the shoe and played the role of warm socks.

Otzi was found with more than 50 tattoos covering his body from head to toe. Researchers have determined that they were not made by creating fine cuts in the skin and then rubbing in charcoal. Instead, the process used left a series of lines and crosses all over Otzi’s skin. And, since the tattoo locations were areas that were prone to injury or pain, researchers speculate that they may have marked acupuncture points.

Unfortunately, for Otzi, he suffered from a variety of maladies and disorders. He had worn joints, hardened arteries, gallstones, a nasty growth on his little toe, and parasitic worms in his stomach. Researchers also discovered advanced gum disease, tooth decay (not surprising since he probably never cleaned his teeth), and alarming levels of arsenic in his system (probably due to working with metal ores and copper extraction).

On his final day, Otzi carried a long list of equipment with him: a longbow made of yew, a chamois hide quiver, fourteen arrows (only two completed), a yew-handled copper ax, and a flint-bladed dagger with a woven sheath. Additionally, Otzi carried two species of mushrooms. One of these, known as the birch fungus is known to have antibacterial properties, and was likely used for medical purposes. The other was a type of finder fungus, included with a part of what appeared to be a complex fire starting kit. The kit featured pieces of over a dozen different plants in addition to flint and pyrite for creating sparks.

On Otzi’s fateful final day, he probably consumed his last meal a short time before setting out on a hike from which he was to never return. His meal consisted of a bit of unleavened bread made of einkorn wheat (one of the few domesticated grains used in the Iceman’s part of the world at this time), some other plant, possibly an herb or other green, and meat. Both ibex meat and red deer meat were detected in his stomach.

Who and What Killed Otzi?

Many theories of Otzi’s demise exist. One of them, held by biologist Thomas Loy from the University of Queensland, for example, is that Otzi and one or two companions were hunters who engaged in a fight with a rival group.  Then, at some point, Otzi may have carried (or been carried by) a companion. Weakened by blood loss, perhaps Otzi put down his equipment against a rock, lay down, and expired.

However, using protein investigation, the latest research indicates that Otzi’s death was a result of brain damage that was likely caused by a blow to his head. 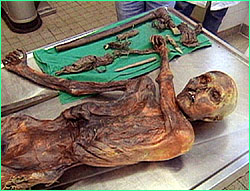 Since Otzi was discovered over 20 years ago, scientists have continued to study him carefully.  In fact, very recently, as a result of using samples drawn from the mummy’s hip bone, researchers have determined that he has at least 19 living relatives (all male). Their common ancestor may have lived 10,000 to 12,000 years ago.

So, what additional secrets is Otzi keeping as he lays in his resting place in the South Tyrol Museum of Archeology in Bolzano (South Tyrol, Italy)? When will he reveal the next exciting discovery? Stay tuned for future developments.

I am the Iceman

Living Relatives of Otzi the Iceman Mummy Found in Austria

Were Otzi the Iceman’s Tattoos an Early Form of Acupuncture?

Oetzi the Iceman: The south Tyrol Museum of Archeology

Oetzi – Iceman of the Alps

Oetzi The Iceman – A Webquest

Testimony from the Iceman