For thirteen days in October 1962, the world waited while two super powers, the United States and the Soviet Union, challenged each other over nuclear weapons on the island of Cuba. 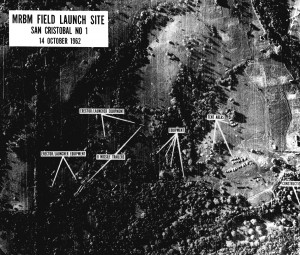 What happened when the Soviet Union attempted to retaliate and place missiles less than one hundred miles from the United States? Did the Cold War turn hot? Students will be amazed as they explore this nerve-racking moment in world history.

Since 1960, U-2 spy planes had flown over Cuba gathering intelligence data for the United States government. In October 1962, pictures taken of the island indicated something potentially threatening was happening. Learn about the spy planes and the importance of this initial discovery by watching an excerpt of the PBS show History Detectives. 3D Cuban Missile Crisis. Then, view the site’s 3D Cuban Missile Crisis Slideshow. The Cuban Missile Crisis officially began on October 16, 1962 when President John F. Kennedy viewed images of Soviet missile sites in Cuba, just ninety miles south of our country’s borders.

Over the next several days, Kennedy and his advisors discussed the United States’ options. Kennedy could use diplomatic pressure, a land invasion of Cuba, air strikes, or a naval blockade to force the Soviet Union to pull out its missiles. Ignoring the situation and doing nothing at all was definitely not an option. To learn about the first few days of the crisis, visit the National Archives site Eyewitness. Use the pull down Contents menu to select President John F. Kennedy 1962 Cuban Missile Crisis. A non-Flash version of the site is also available. Read the brief introduction; then click the tabs at the top to listen to a brief audio excerpt of the president’s October 18, 1962 meeting. Make sure to view the four images.

President John F. Kennedy and his group of advisors, the EXCOMM (the Executive Committee of the National Security Council), faced some very difficult decisions during the Cuban Missile Crisis. If you were in the president’s shoes, what decisions would you make? Could you avoid war? Participate in Teaching American History’s Cuban Missile Crisis simulation. Read the special intelligence report and click to choose your decision. Did you make the same decision as President Kennedy? Continue reading to find out.

President Kennedy took his time in making a decision about how to handle the crisis in Cuba. As a result, from October 16-21, 1962, the United States government kept the American public in the dark about the events unfolding just ninety miles south of Florida. What did Kennedy do during those first six days of the crisis? Visit the John F. Kennedy Presidential Library and Museum’s exhibit on the Cuban Missile Crisis and view Kennedy’s White House Diary. Read the entries from October 16- October 21, 1962. Many entries have multiple pages so be sure to read the entries in their entirety. Each entry also allows the viewer to see Kennedy’s daily appointments as well as what was in the news. Explore the rest of the site and watch a Cuban Missile Crisis interactive presentation and listen to recordings of presidential meetings during the crisis.

After several days of meeting with advisors and keeping the crisis out of the public realm, Kennedy decided on a course of action and spoke to the American people about the events unfolding in Cuba. Watch an excerpt of President Kennedy’s October 22, 1962 speech. In his speech, Kennedy outlined his steps for handling the crisis. The first was to establish a quarantine of all weapons shipments to Cuba enforced by a naval blockade of the island. The second step was the continued and increased surveillance of Cuba. Lastly, Kennedy warned the Soviet Union that the United States would consider a launch of nuclear weapons from Cuba against any Western Hemisphere target as a Soviet attack against the United States. This would result in a retaliatory nuclear attack against the USSR.

On October 22, 1962, Kennedy wrote a letter to Chairman Khrushchev, the head of the Soviet Union, and included a transcript of his televised speech. Read an online version of Kennedy’s letter at Yale Law School’s Avalon Project site. Throughout the following days, the two world leaders exchanged letters. Read Khrushchev’s response to Kennedy’s letters at the Library of Congress. Soviet Archives exhibit.

Additionally during the thirteen-day crisis, President Kennedy spoke with other world leaders to gain their support. Fortunately, presidents between 1940 and 1973 secretly recorded over five thousand hours of presidential meetings and phone  conversations. As a result, we are privy to some of Kennedy’s own conversations and meetings during this time of crisis. The Miller Center of Public Affairs at the University of Virginia has uploaded many of these conversations onto their Web site. Listen and read the transcript of a phone conversation between Kennedy and British Prime Minister Harold Macmillan. In addition to this phone conversation, visitors to the site can also listen to a meeting with Air Force Chief of Staff General Curtis E. LeMay and Kennedy’s October 27, 1962 meeting with the EXCOMM.

For several tense days, the world waited to see if the Soviet Union would challenge the United States. naval quarantine of Cuba. An attempt by a Soviet ship to defy the quarantine could very easily lead to war, even nuclear war. Fortunately, the incident ended peacefully with the Soviet agreement to remove the missiles from Cuba. The United States, in turn, agreed not to invade Cuba and secretly removed their missiles from Turkey. Watch a History Channel video about the end of the crisis. Cuba remained a communist nation under the leadership of Fidel Castro, but with the removal of the Soviet missiles, the United States could breathe easier.

The Cuban Missile Crisis did not signal an end to the Cold War. Even after the assassination of President John F. Kennedy and Chairman Khrushchev’s fall from power, the Soviet Union and the United States remained enemies. The Cold War lasted another three decades until the fall of the Berlin Wall and the collapse of the Soviet Union.

ERA 9: POSTWAR UNITED STATES (1945 TO EARLY 1970s)
Understands how the Cold War and conflicts in Korea and Vietnam influenced domestic and international politics

TEKS
§113.32. United States History Studies Since Reconstruction
(6)  History. The student understands the impact of significant national and international decisions and
conflicts from World War II and the Cold War to the present on the United States.
(G)  analyze reasons for the Western victory in the Cold War and the challenges of changing relationships among nations