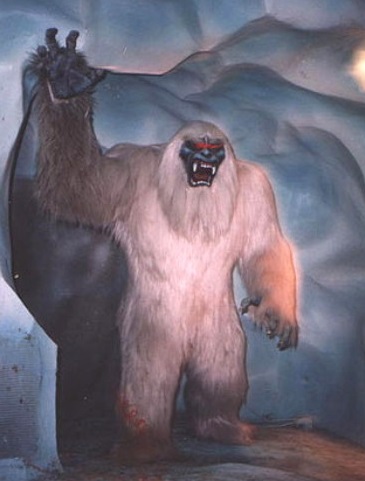 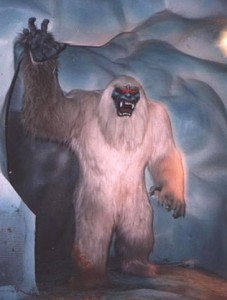 For generations, stories of mysterious creatures that lurk beneath the sea or hide among mountain peaks have mesmerized and intrigued listeners. In Norse mythology, the serpent Jormungand is so long, he wraps around the world and holds his own tale. For decades, visitors have flocked to Scotland in hopes of seeing Nessie, the Loch Ness monster. In America, people search for Big Foot. Every child who has seen the seasonal tv special Rudolph knows of theAbominable Snowman, the monstrous creature thought to live in the frozen heights of the Himalayan mountains.

What drives these stories is the possibility they are true-- after all, there are corners of the world that have not been widely explored.Add to this the creative power of our imaginations, and the desire to know. What if a serpent lives in the deepest, darkest parts of the ocean? What if an enormous snow monster exists at heights and temperatures few men dare to venture? What if a big-footed creature lives in America’s swamp lands? Scant bits of evidence—eyewitness accounts, grainy unfocused photos, hair samples, and impressions of footprints—neither prove nor refute the possibility and so fuel both the quest and the stories.

This week, evidence emerged that may solve the case of two mysterious creatures. A British scientist announced his research reveals that Yeti, the Abominable Snowman, not only is real but is a bear. A pair of oarfish were spied on two separate occasions in California, perhaps explaining the mystery of the Sea Serpent. 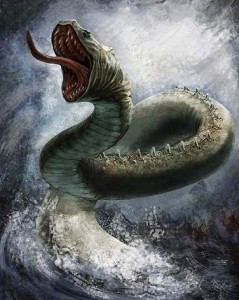 Learn more about the science of searching for hidden creatures.  Discover more about the mysterious creatures that live deep in the ocean and atop the highest mountain ranges. Then, decide for yourself whether the evidence is credible or the mystery continues.

To some, the search for and study of hidden creatures is a credible science—evidence and inquiry-based. Proponents would remind us that new species, even mammals, are still being discovered. For more from this perspective, watch the Sunday Morning story, What is Cryptozoology?

To others, the search for hidden creatures is an amusing hobby that lacks scientific credibility. Scientific American columnist Michael Shermer shares the skeptics’ perspective in his column, Show Me the Body.

History provides several examples of hidden creatures whose existence was doubted…until they were proven to exist. The Giant Panda is one story of a hidden creature found by patient, persistent searchers. You would think, considering its size, it would have been found easily. Because of its remote location, it took sixty-five years to find the Giant Panda.  Discover some of history’s fantastic creatures; read the article from PBS’ Nova series.

Tales of a Man-Bear-Snowman have been told by people living in the Himalayan mountains for over a century. For over a century, eyewitness accounts, and handfuls of evidence have fueled the search for Yeti. Explore an historical timeline of the search for the Abominable Snowman as well as other possible explanations.

With each new encounter, people probe the possible explanations: a bear, a wolf, a hermit. Not everyone believes a Yeti exists. What exactly is a Yeti? What does it look like? And, what role does it play in local cultures? Discovery Education answers these questions in the article, What is a Yeti?

National Geographic is one of the scientific organizations that has sponsored teams searching for Yeti. It is a search made even more difficult by the geography and climate. Watch two short clips to hear what technology the team hopes will help and what challenges they face.

Last year, British geneticist began testing Abominable Snowman samples. He shared his conclusions with the BBC. Watch the short interview and read the article. What questions do you have for Dr. Sykes? What criticisms or questions might skeptics such as Michael Shermer have? Do you believe the case of the Abominable Snowman has been solved? 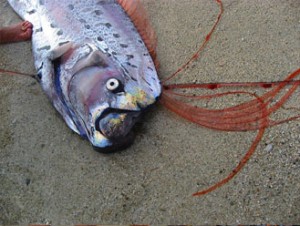 Yeti is not the only mysterious creature whose tales have mesmerized and perplexed people. Tales of sea serpents have transfixed generations of mariners. Hans Christian Andersen, inspired by the telegraph cable being laid in the Atlantic Ocean, added to the serpent lore with his tale The Great Sea-Serpent. Like Yeti, many theories have been shared over the years to explain eyewitness accounts of a sea serpent: masses of seaweed, waves, shark, and oarfish.

This week something uncanny happened: on October 15, and again on October 20, oarfish, sea-serpent-like creatures, were found along California’s coast. Read about both incidents.

What do we know about the oarfish? Why is it a plausible explanation for what mariners have seen? Visit the National Oceanic and Atmospheric Administration (NOAA) to learn more about oarfish.

Like Yeti, sea serpents live in inhospitable places. This complicates scientists’ ability to discover and to study them. Animal Wire’s video shares the specialized equipment needed to travel to the oarfish,  and introduces viewers to the deep ocean habitat in which oarfish live. Do you believe this solves the mystery of sea serpents? What questions are unanswered in your mind?

As you read the newspaper this week, think like a scientist. What stories leave unanswered questions in your mind? What do you want to know more about? List all your questions. What tests, experiments, or follow-up questions would you like to propose? What theories do you have that relate to articles you read? How does this connect to other areas of scientific exploration? How might other areas or subjects inform scientists as they solve this question?