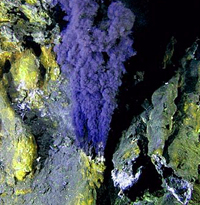 From plague to super-hot environments, microbes are extreme survivors and thrivers.

Buried for seven centuries, the Black Death was recently unearthed in London. While excavating for a new rail line, thirteen bodiesÂ were found lined up in a row with evidence they were laid there in the mid-14th Century. Experts believe they may have been some of the plague’s earliest victims in Britain. This particular plague spread across Asia and Europe; estimates put the death toll around 25 million in Europe alone between about the late 1340s to the late 1660s. The discovery has not caused a renewed outbreak, however, the casualties may still house genetic remnants of the pathogen, possibly providing a modern-day analysis.

In this article, two of the three domains of life are explored: Bacteria and Archaea. Each domain can be introduced with a specific example through engaging interactive online modules, and then allow students to explore the general characteristics and broader diversity within the domain using a couple of more comprehensive supporting Web sites.Many microorganisms, or microbes, are vital to keeping biological systems healthy, serving as important components in system regulation, whether within another organism’s body or as part of an ecological food web. However some microbes, like the plague bacterium, can cause extreme disruption of healthy biological systems, while others thrive in extreme environments where few others could survive.

If students need a primer or refresher on what exactly “makes” a microbe, have them visit PBS to Make a Microbe for themselves. This module is part of a larger educational package that features how scientists have been and continue to work to try to synthesize life. Using easy-to-understand metaphors, the module leads students through the fundamental components of the key traits that distinguish a living creature from nonliving stuff:Â  a container, an engine, instructions and a scribe, as wells as the ability to evolve.

Before moving, discuss with students what kinds of microbes exist, asking students to volunteer specific examples that come to mind. Many that students suggest will likely be bacteria and viruses. Tell students that they will primarily be exploring microbes that consist of cells; viruses are noncell entities, which they will touch on later. 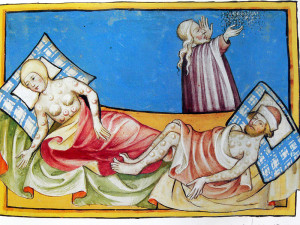 A great example of this domain is the plague-causing bacterium related to the recent discovery of bodies in London. A fun way to give students an idea of how the plague affected human populations both health-wise and socially is to have students, as a class or in small groups, review The Black Plague, this interactive module highlights some of the common practices people at the time thought would fend off infection. The module does not describe the pathogen specifically, so following the introduction ask students if they know what kind of microbe caused the plague. Many may believe it was a virus.Â  Hand out or direct students to read the Center for Disease Control and Prevention’s Facts About Pneumonic Plague. This short summary explains that this and similar documented outbreaks were caused by a particular microbe called, Yersinia pestis, a bacterium.

From this, and other examples that students may have mentioned earlier, prompt students to visit the University of California Museum of Paleontology’s History of Life Through Time. As they will see, the site showcases the three Domains of Life. Instruct students to read the brief introduction on the page, and then click into the Bacteria section. Ask students to take notes as they research what bacteria are and what evidence of them exists in the Fossil Record. Students should also record information about their Life History & Ecology, such as how bacteria are grouped based on their response to oxygen or how they obtain energy, as well as how they are important to the global ecosystem. Students can use the More on Morphology page to sketch their own diagram of a bacterium’s structure and general characteristics.

On the Systematics page, students will discover the diversity within this domain. Most of exhibits for the groups listed in the cladogram are still under construction, but students can explore Cyanobacteria and Spirochetes. Split the class into two or four teams. Assign each team one of the exhibits to summarize and transfer the information to a poster format. Then, split the class into six teams and assign each team one of the uncompleted bacteria groups to research using other sources and create a poster to fill in that gap. Hang the posters on a classroom or hallway wall in a similar cladogram orientation, using yarn to show the appropriate relationships. As a whole class, review the posters and discuss the characteristics and relationships between the groups. In what ways do or may the different groups of bacteria help maintain or disrupt systems, whether the system is ecological, a population, or an individual?

Some students may be familiar with the hot springs of Yellowstone National Park, which was one of the first places that examples of this domain were discovered. However, for this journey, this example leads students to the Russian Far East to examine the Extremophiles in Kamchatka. Navigating and viewing the site in small groups, students should read the brief introduction, and then use the main menu at the top to go to the Slide Shows index. Direct students to click into each of the numbered locations on the photograph, in sequence from 1 to 4. When they have finished 1, then they should click the Slide Shows link at the top to go to the next topic.

As they listen to the narration and examine the images throughout the slideshow, prompt students to take notes about what they hear explained and also what they notice in the photographs. Moving the computer cursor over each slide as it appear will additionally reveal a photo caption at the top of the screen.

Students may also wish to watch the three Videos (one is narrated in Russian, the other two in English), and check out the Map, which shows the study area’s location.

When all groups have finished watching the slide shows, ask them to talk over their notes between them and then have groups discuss their notes and reflections as a class. What about this expedition and their organisms of study were familiar? What was new or surprising? What can be said about the methods and purpose of what one or more of the featured scientists were doing?

Then, back at the University of California Museum of Paleontology’s History of Life Through Time, have students jump into the Archaea domain. Again, ask students to take notes about the general characteristics of life forms in this domain, as well as what has been found in the Fossil Record and what is known about some of their Life History & Ecology. The Systematics and More on Morphology pages explain and show more about how members of this domain are different from those in Bacteria.

Ask student teams to research and find one example of an extremophile that has been found in a location other than the Uzon Caldera. Instruct the teams to use what they learned generally about Archaea and also the specific information about their own example to develop a poster highlighting its characteristics. Hang the collection together, and discuss the similarities and differences between the different examples. Again, in what ways do or may the organisms in this domain help maintain or disrupt systems, whether the system is ecological, a population, or an individual?

To take students into the world of microbes even deeper, direct them to the Annenberg Learner site where they can immerse themselves into Unseen Life on Earth: An Introduction to Microbiology.Â  Each the 12 videos in this series are about 30-minutes long and feature a specific topic. For example, some highlight the general nature, relationships and diversity of microbes, such as 1. The Microbial Universe and 6. Microbial Evolution. The second video, The Unity of Living Systems, explains various cell types and how viruses are noncell entities. Other videoss relate to how microbes interact with other organisms, whether symbiotically or causing harm. Such videos include 8. Microbial Ecology,10. Microbial Interactions, and 12. Human Defenses. 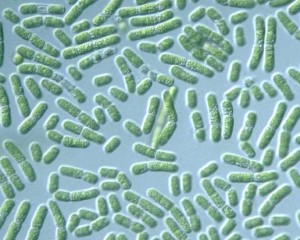 This video series could be used in a number of ways, depending on your students and available time. For example, have students watch one or more of the videos, and then give them a writing prompt related to the video’s topic and the Bacteria or Archaea domain. In small groups, students could simply be assigned to watch then report a summary of the video to the entire class. One or more of the videos could also be assigned to individual students to support an extra credit or advanced assignment, or as part of a special project.

Regardless of where your students go from here, understanding the nature, diversity, relationships of microbes to ecosystems, populations, and individuals organisms, is tightly connected to our health and where and how we live.

Â§112.34. Biology
(11)Â Â Science concepts. The student knows that biological systems work to achieve and maintain balance. The student is expected to:
(C)Â Â summarize the role of microorganisms in both maintaining and disrupting the health of both organisms and ecosystems;

History of Life Through Time
http://www.ucmp.berkeley.edu/exhibits/historyoflife.php

An Introduction to Microbiology
http://www.learner.org/resources/series121.html