If you have ever had an x-ray, you have Marie Curie to thank. The Nobel-winning physicist and chemist researched radioactivity, discovered polonium and radium, and created the first mobile x-ray machines to assist doctors during World War 1. Marie Curie’s research contributed to physics and chemistry, and changed medicine and medical treatments. Her persistence and scientific success helped alter people’s perceptions of female scientists. As the final days of March--Women’s History Month--fade, explore Marie Curie’s life, research, and legacy. The American Institute of Physics celebrates Curie’s life and work with an interactive exhibit. As you explore, click the links to read excerpts of Curie’s letters and papers, and view maps and photographs. 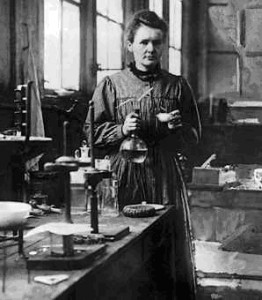 Marie Curie’s given name was Maria Sklodowska. She was born in 1867 in what was formerly Poland. At the time, Poland was not an independent country; it had been divided into pieces and divied up among other nations. Maria’s family was devoted to its Polish roots. Their Polish heritage and hope for that Poland would once again be independent influenced Marie’s childhood and education. Marie and her sister were determined to receive a formal education so they devised a plan to earn the money for them to attend school in Paris. After marrying Pierre Curie, Marie, like many women today, devised a way to balance work and family. 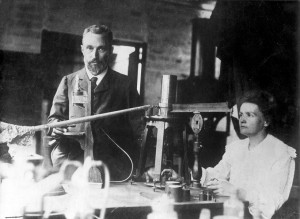 Life is full of gaps--things that are unknown. Marie Curie’s thesis research probed a scientific gap and led to important discoveries about xrays and uranium. Learn more about her thesis study into uranium rays and the Curies’ discovery of polonium and radium. To understand Marie’s experiments, watch an excerpt from Marie Curie’s Radium: The Six Experiments that Changed the World. The discovery of radium created great excitement and a new industry.  Mental Floss magazine shares nine ways radium was used before we realized radiation exposure wasn’t such a good idea. 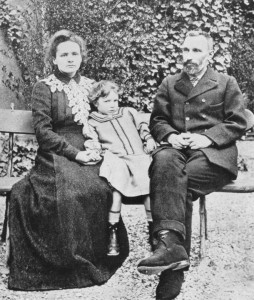 In 1906, Pierre Curie died suddenly. It is a testament to their teamwork that Marie stepped into Pierre’s place as professor at the Sorbonne. She was the first female professor at the University of Paris; however, Curie’s professional life was not without scandal.

In 1911, Marie Curie earned a second Nobel Prize, this time in Chemistry. It marked the first time a person earned two Nobel Prizes. Read the 1911 award ceremony speech and Curie’s Nobel lecture. While you are visiting the the Nobel website, watch the very short video of Marie Curie at work. 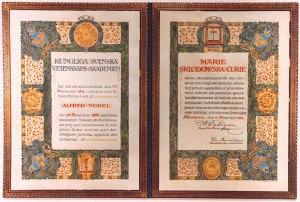 During World War 1, Curie took radiology to the front. Curie applied her knowledge of radon and radioactivity to the war effort. Curie invented ‘petite curies’, miniature and mobile x-ray machines that allowed doctors on the front to treat soldiers and organized a military radiotherapy service. Curie trained her daughter, Irene, to work in the mobile labs. Ultimately, Irene followed in her parents’ footsteps, modeling her parents’ collaboration, and extending her parents’ research. 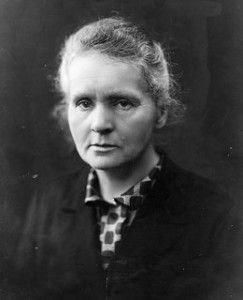 In the later years of her life, Marie Curie turned  her attention to building a world-class Radium Institute.  To achieve this, Curie reached out to journalists and benefactors. Both Marie and Pierre Curie dedicated their lives, literally, to their research. The side-effects of long-term radiation exposure was not known to them during their long, unprotected research hours. Marie Curie died in 1934. Read the obituary published in the New York Times.

Marie Curie’s legacy as a scientist can be found around the world...and above it. Polonium is used to eliminate static energy in industrial machines and provide thermoelectric power in space satellites. Radium produces radon, a gas used to treat some cancers. It is also used in lightning rods and x-ray imaging equipment.  Marie Curie's work also provides the basis for nuclear energy and atomic weapons. But there is also Marie Curie’s legacy as a woman.

As you read the newspaper this week, keep Marie Curie in mind. What articles connect to Marie Curie's discoveries and how? Which highlight scientists and their work? Which articles bring to mind gaps--the unanswered questions--and what are the gaps or questions they provoke?

Create a web with your classmates with Marie Curie in the center. Attach the articles that connect to her on your web, as well as the connections you think of. How does her sphere of influence continue?