Frozen Sea Turtles Wash up on Shore along the East Coast 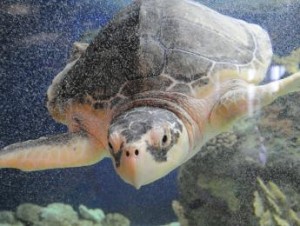 Sea turtles, such as extremely endangered Kemp’s ridley, travel up along the eastern seaboard every spring and summer in search of the crabs that they feed on. Leaving the warmer waters of the south, they venture as far north as Cape Cod, Massachusetts. By fall, if they do not return to the southern waters quick enough, cold waters can freeze and shock and potentially kill the turtles. Every year, a very small number are unfortunately expected to wash up on to shore, frozen from the cold waters. This is normal; it is expected. However this year, the number of turtles showing up on the beach is well into the thousands. They are appearing daily in mass piles. It is a terrible situation and those that find them are horrified and at a loss for what is causing this and what to do. 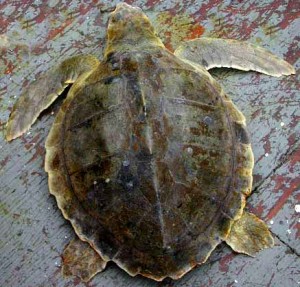 Cold stunning is the process that causes the life-threatening decreased body temperature in the turtles. Basically, it is a hypothermic reaction that occurs when sea turtles are in frigid water temperatures for too long. Since turtles are cold-blooded, their bodies acclimate to the temperature of the environment that surrounds them. Decreased heart rate and circulation, and then shock, pneumonia and possibly death are the symptoms.

Every year, veterinarians and volunteers are prepared to watch for turtles that may be in danger, rescue them, nurse them back to health, and return them to warmer climates. This year, those resources are stretched well beyond the limit and researchers and rescue workers are overwhelmed by the daily inflow of dead or dying turtles.

So what have rescuers been doing and how are they handling this terrible situation? Read Coming together to save cold-stunned reptiles (The Barnstable Patriot) to learn more. Once the rescuers are able to transfer the turtles, where do they go and what happens next? Read Coast Guard plane brings 193 rare sea turtles to Orlando (Sun Sentinel) and watch the video news clip. Then read Cold NE Weather forces rescue of turtles to the Keys (Eyes on News South Florida) and view the video. Continue with Florida Aquarium takes in endangered sea turtles stunned by cold (Tampa Tribune).  Finally read Texas biologists warm chilled sea turtles (The Washington Post).  Walt Disney World in Kissimmee is even getting involved in the efforts, check out how Disney is helping. 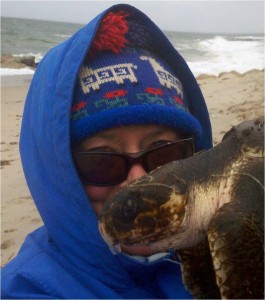 This year is particularly stressful for the turtles, yet scientists cannot figure out why more of the turtles have not returned to the warmer waters on their own. The amount of manpower and funding that is required to rescue and care for the turtles is very large and surpasses the available resources and number of volunteers that are currently in place. 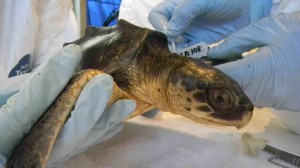 As you read the local newspaper this week, follow this story. Note any headway that scientists may make in understanding why so many cold-stunned sea turtles have washed up on the beach this fall. Conduct your own research about sea turtles and migration patterns and their relationship with the coastal regions. Write a letter that might be included in the newspaper for a coastal region that alerts the citizens to the dangers that the sea turtles face.