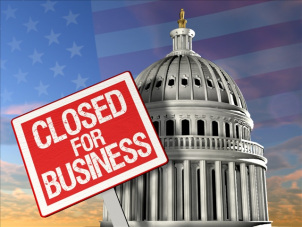 Closed for Business: What Happens (and doesn’t) During a Partial Government Shutdown 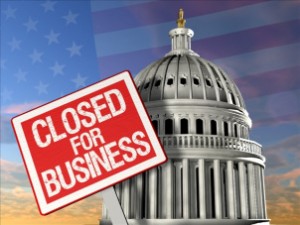 Members of Congress had until September 30 to pass a federal budget. Because they did not, the federal government began a partial shutdown on October 1. Without a budget to pay employees or the overhead needed for office expenses such as water and electricity, thousands of offices and sites are closed, projects are on hold, and paperwork is in limbo.  It is a partial shutdown because essential federal workers report to work. All other federal employees—non-essential employees—across the country are furloughed. This means they may not work until Congress passes a budget, and they are not paid for these days. Once Congress passes a budget, those employees will return to their jobs and government services will resume.

People across America are scratching their heads in wonder. How could this happen? Now Americans must make contingency plans for government services and paychecks that are unavailable. Discover why it came to this, how it has affected various agencies and services, and how it has impacted people. 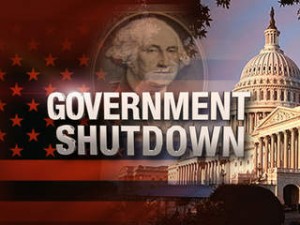 Congress must approve a budget to submit to the President of the United States. View a flowchart of the federal budget process. This time, some Republicans in the House of Representatives have demanded that funding be stripped for the Affordable Care Act (aka ObamaCare) as part the new budget. Democrats and the President contend that Act has already been voted on and disgruntled Republicans who did not like the outcome should not hold the federal budget hostage in an attempt to change the Affordable Care Act.

Because the federal government is partially shutdown, non-essential employees must stay home. This will affect towns and cities across the United States differently but it will affect people far beyond the Capitol boundaries. View a 2012 map of federal employees. Click on Virginia, Maryland, Texas, South Dakota, and your home state.

What Services are Available?

Examine the 2010 statistics for the District of Columbia. Study the first chart for each state (or district): the total number of federal employees and retirees in the state, by department. Create a bar graph that illustrates this information. Which department employs the most people? Do you know what services this department provides? Based on these charts, explain who you expect will be hardest hit by the shutdown. 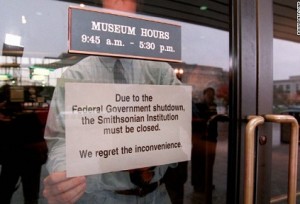 You can probably quickly list a list of government departments: transportation, defense, interior, energy, education, and commerce. But what services does each department provide and which are deemed essential (remain open) and non-essential (close)? CBS News correspondent Chip Reid summarizes some of the impacts. Read the interactive from Fox News for a more complete list of how federal departments are affected. Use the slider to scroll across the full list of entries. For another perspective, view 10 ways  the shutdown will affect your daily life.

Being unable to hike in a federal park, to tour the Smithsonian, or to begin your research project may seem like minor inconveniences. However, many of these inconveniences have large financial, planning, and health implications, especially should the partial shutdown extend beyond a week. Discover more about who will be affected and how. Take a peek at the partial shutdown from these perspectives.

Washington D.C. attracts tourists from around the world and across the United States. Many of these trips cannot be rescheduled; airline tickets and hotel reservations are paid for. Police tape, locked doors, and barriers announce that national museums (the Smithsonian, the Holocaust Memorial Museum), Capitol attractions (the Pentagon, the White House), and all national monuments and memorials (the Lincoln Memorial, World War 2 Memorial, Martin Luther King Jr Memorial) are closed. For tourists who are in Washington D.C. during the partial shutdown, Washington.org shares a list of what is closed, and suggestions for what to see instead.

The national park system is one place where the impact was severe and immediate. All federal parks are closed. This means visitors who traveled from as far away as Japan or Australia to the Grand Canyon or Yosemite, cannot enter the park. It also means you cannot drive through federal parks. Commuters who drive these roads to work, must find alternate routes. Hear from Scott Lee who was supposed to begin a river rafting adventure this week with his son. Park closings also affect businesses near national parks. Hear one example: Arizona Raft Adventures. 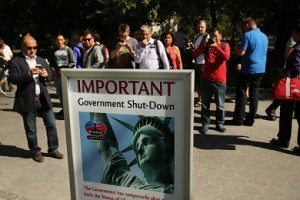 Many NIH (National Institutes of Health) employees are deemed non-essential and are not working. On the face of it, this seems to have few side-effects. Research can wait, right? Behind the research are patients—sick people who are counting on NIH research, treatment, and programs to help them recover. Listen to the story of how the NIH has been hit by the partial shutdown.

Most NASA employees are non-essential. A core group continues to support the astronauts at the International Space Station. But what of NASA’s other satellites, and unmanned space missions? Explore how the partial shutdown alters NASA’s work.

Among the hardest hit by the partial shutdown are low-income families and children, and Native Americans. The loss in federal funds means critical care is cut to citizens least likely to have savings, or other support options. Read more about the changes on Native American reservations. 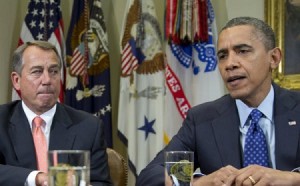 Despite the partial shutdown and its ripple effect throughout the nation, members of Congress continue to receive a paycheck. In solidarity, some have chosen to donate or to refuse their check during the partial closure. View a list of Senators and Representatives and who will keep their check.

The partial government shutdown will likely be headline news until the situation is resolved. Follow the story in the [TargetNewspaper]. It is an important decision that will impact government funding, the debt ceiling, and ObamaCare. Create an editorial cartoon that shares your view of the situation and the parties involved. Or, write a letter to your Congressmen.