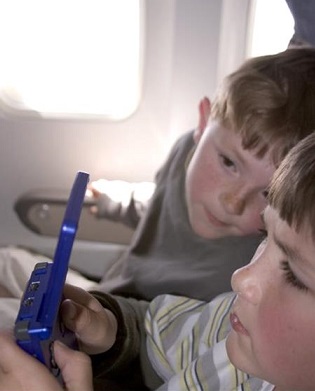 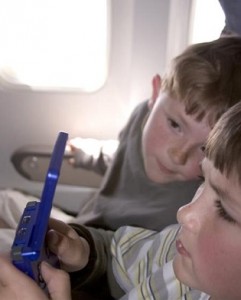 You are on the plane, settling in to your seat when the announcement is made:

At this time, we request that all mobile phones, pagers, radios and remote controlled toys be turned off for the full duration of the flight, as these items might interfere with the navigational and communication equipment on this aircraft. We request that all other electronic devices be turned off until we fly above 10,000 feet. We will notify you when it is safe to use such devices.

Now what do you do to pass the time? Talk to the passenger next to you? Read the in-flight magazine? Whether for business or for pleasure, travelers increasingly take electronic devices with them: laptops, e-tablets, e-readers, portable music devices, hand-held gaming consuls, and cell phones. Once on-board the airplane, passengers must stow their personal electronic devices (PEDs) during taxing and take-off, and again during landing. When the plane has reached 10,000 feet, you are allowed to power up your laptop, surf the web on your e-tablet, read a book on your e-reader, listen to music on your portable media player, or play games on your hand-held consul. However, using cell phones to make phone calls is strictly banned and all phones should be turned off or to ‘airplane’ mode during the entire flight.

On October 31, the Federal Aviation Administration released new guidelines. They came as a Halloween treat to airline passengers. According to the new guidelines, once an airline proves its planes are capable of handling radio interference, passengers will be allowed to use most portable electronic devices during all phases of flying, including take-off and landing. The exception: cell phones still should be turned off or placed in ‘airplane’ mode.

Airlines wasted no time requesting approval. On November 1, Delta and JetBlue became the first to earn approval. Their passengers now are allowed to use PEDs the entire time they are on-board. No more turning PEDs off (or pretending to) during take-off and landing. Though, airline personnel do hope you will break away from your PEDs to listen to the safety announcements. 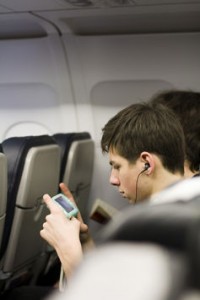 This is news to celebrate for any passenger eager to remain connected or entertained the entire time on-board. But, it also makes you think about on-board electronics. How does wifi work while 10,000 miles up and traveling at approximately 500 mph? Why are cell phones singled out and not approved for in-flight use? What does ‘airplane’ mode mean?

So, is it true?—Can the interference from a cell phone effect a plane? Or is that urban myth? CNN investigates; watch and read, Can your cell phone bring down a plane? If the answer is ‘probably not,’ why are cell phone calls still banned? The answer has several parts.

First, you must consider the timeline of innovations and testing. The rules regarding electronic devices on-board airplanes were established years ago, before many of these devices existed and before many planes were designed. Of particular concern are the radio signals transmitted by PEDs and whether those signals might interfere with the plane’s navigational, communication, and flight equipment. Older planes were not designed with cell phone interference in mind; there have not been extensive testing on the affects of cell phones on planes. Older planes also do not have built-in protections against amplified radio waves from many cell phones.

The second part of the answer is about communications systems. Not, the communication systems on planes, but on the ground. A hint: it is the Federal Communications Commission (FCC) and not the Federal Aviation Administration (FAA) that mandates cell phones should be turned off during flight. To figure it out, read more about how in-flight mobile services work.

There are other factors to consider: profits, safety, demand, and passenger comfort. Read the USA Today article, Internet calls spur clash over talking in the air. 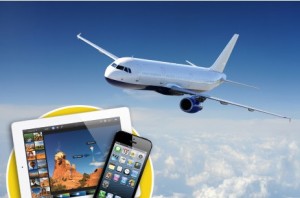 As adult gadget ownership steadily increases, it becomes increasingly difficult to cut passengers off from their electronics. Newer devices can be used in many ways—a smart phone is not only a phone, a tablet is not only for creating documents. This makes it more difficult to monitor usage while in-flight. Passengers do not need to have a phone to place a call—they can use a computer with wifi and call with Skype. In the United States, 40% of flights are wifi accessible. Read the Youngzine article to discover how wifi reaches passengers as they soar above the clouds.

For now, passengers flying across America’s friendly skies seem happy to travel without making phone calls. There are no plans to permit phone calls during flights. Cell phones still have to be turned off or placed in ‘airplane’ mode. Does anyone understand what ‘airplane’ mode does? LiveScience explains what airplane mode is and what features you can (and cannot) use when your PED is in airplane mode.

This week, read your local newspaper and find articles about new technologies. Write a short story or create a story board that imagines how this new technology will change our daily lives.