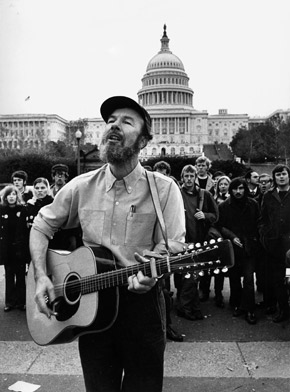 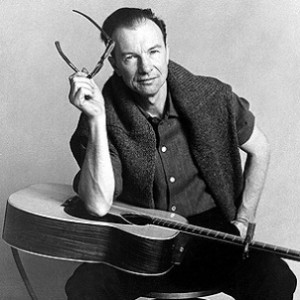 On Monday, January 27, American folksinger, songwriter, and life-long advocate Pete Seeger died at the age of 94. Pete Seeger believed deeply in the founding vision of America: justice and equality for all. Throughout his life he revived and used American folk music to unite people, and to work toward a more perfect world. For six decades he raised his voice in songs about peace, justice, and equality. Pete Seeger influenced generations of musician, including Bruce Springsteen. His songs spoke for the people during two of America’s most contentious and important times: the Civil Rights Movement, and the VietNam era. Contemporary teenagers may not recognize his name; however, he is worth knowing. This week, meet Pete Seeger and hear the songs that helped him change the world. 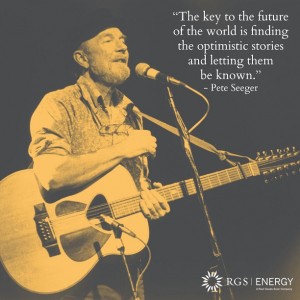 Pete Seeger led a remarkable life. He was born into a musical family with deep roots in Puritan America and became one of folk music’s greatest advocates. View a timeline of Pete Seeger’s life. Read the Smithsonian Institute’s more thorough biography of Seeger and view a slideshow of photographs that span Seeger’s life. Early in his career, Seeger was a member of the popular folk group, The Weavers. Listen to The Weavers sing Kisses Sweeter than Wine. Watch The Weavers sing their hits Goodnight, Irene and Tzena, Tzena, Tzena. The Tzena video also highlights Seeger’s hallmark banjo skills.

Traditional folk music is a dynamic art form. Like folk stories, it is passed along orally from generation to generation. Often, the origins of a song are not known and the lyrics change over time as people add verses and change the lyrics or tempo. Many folk songs retell historical events or personal stories. The 1960s saw a renaissance of folk music as artists, including Seeger, found inspiration in traditional folk music. Pete Seeger reworked some traditional folk songs and wrote new songs in the folk tradition. To appreciate Seeger’s power as a folksinger and songwriter, listen to the first three songs on the Smithsonian podcast that examines Seeger’s work (1:00 to 12:46). Listen to Seeger discuss folk music, the story behind some of his songs, and the job of songs. 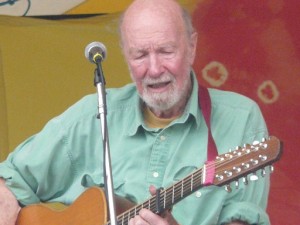 The 1950s saw the emergence of McCarthyism and the hunt for communists or “un-American activity” in America. Hear University of Nebraska-Lincoln professor Dixon explain the roots of McCarthyism and Hollywood blacklisting. (Watch to 5:15.) Pete Seeger was among those called before the HUAC to testify. Seeger was blacklisted and was unable to perform in many venues. Forced underground, he reinvented himself as a folksinger for children. Hear what his concerts during this period sounded like; play It Could be a Wonderful World, and Michael Row the Boat Ashore. You can hear the powerful, infectious audience participation he became known for. 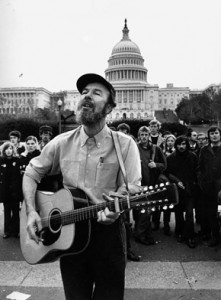 Pete Seeger is as well-known for his advocacy for, as he is for his songwriting. Seeger championed many causes during his life: civil rights, farmer worker’s rights, peace, and cleaning the Hudson River. Longtime friend Arlo Guthrie attributes Seeger’s advocacy not to the belief in each cause but to Seeger’s unbending belief in the goodwill toward men, peace on Earth, and the American vision of justice and equality. After the blacklist, his songs challenged politicians and citizens to live differently, united people around a cause, and spoke for Americans during tumultuous times. His music grew from current events and issues. It is impossible to think about Pete Seeger’s music without considering the social and political context. Listen to the folk song popularized by Seeger that became an anthem of the Civil Rights Movement, We Shall Overcome. Listen to Seeger share the history of We Shall Overcome; it is a classic American folk song, repeatedly born for new causes and new singers. Seeger also wrote original songs as a response to the Civil Rights Movement including If I had a Hammer. Listen to excerpts of Seeger’s 1963 Carnegie Hall concert. Justice and equality were not Seeger’s only causes. Songs of peace andprotest also figured prominently. Listen to three of Seeger’s original VietNam-era songs: the song based on a photograph, Waist Deep in the Big Muddy; Where Have All the Flowers Gone?; and the song based on the verse from Ecclesiastes, Turn, Turn, Turn. But, Seeger's visions extended beyond America's borders; listen to Then We'll Have Peace. Finally, listen to the pro-union song, Which Side are you on Boys? 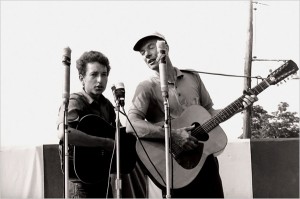 In January, 2009, Seeger led the crowd gathered for President Obama’s inauguration through This Land is Your Land.  It was a remarkable moment: after a lifetime dedicated to civil rights, Pete Seeger marked the inauguration of the first African American President with a folk song that celebrates America.

In his tribute to Pete Seeger, Bruce Springsteen says Seeger has a “stubborn defiant optimism” about America and uses his songs to highlight the ways America falls short and can improve. We should all be so lucky to have such a friend—someone who believes the best about us and challenges us to be our best self.

Pete Seeger led a long and remarkable life. So, too do many people; however, we often only see their aging bodies. For people discovering Seeger for the first time at the time of his death, he is but an old man who sang old music. Just as the accomplishments of older people we encounter every day become archaic and invisible. Tom Hussey examined the divide older people experience between their older bodies, active minds, and the rich lives they have lived in a collection of photos titled, Reflections. 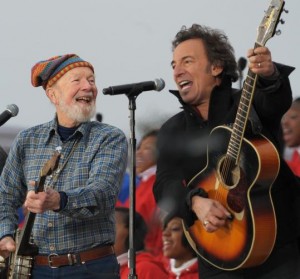 This week, as you read the local newspaper, pay attention to a section you probably rarely read: the obituaries. Read a selection of obituaries. What changes did each person witness in his/her lifetime? What historical events did he/she experience? What might her/his personal or professional life been like? What contributions did he/she make to his/her community? Invite an older person you value to visit. Make tea and ask him/her to share his/her stories. When he/she looks in the mirror, who does he/she see? What have been the most exciting, interesting, and important times of his/her personal and/or professional life? What activities and hobbies does he/she most enjoy and have these changed over time? What would he/she tell the younger version of him/herself? Listen carefully. And, be sure to write a thank you letter. Such sharing is a gift.