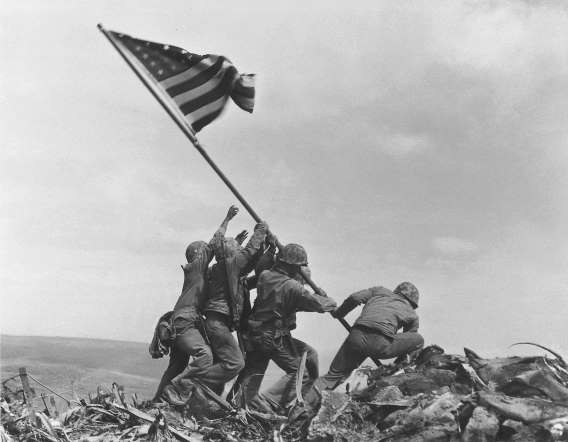 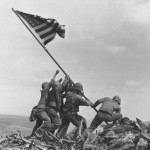 Last week, veterans and families gathered at the National World War II Memorial to attend the ceremony for the 70th anniversary of Iwo Jima. This assembly was to commemorate the battle in which more than 6,800 American service members were killed. Iwo Jima would come to be known as the deadliest battle in Marine Corps history. 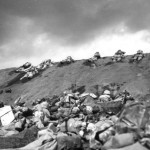 Iwo Jima is a volcanic island located approximately 660 miles south of Tokyo. The tiny island measures only 2 miles wide by 4 miles long. During World War II, the United States was ready to use their new  B-29 ‘Superfortresses’, gigantic bombers that would make attacking the Japanese mainland a viable military action. However, the Japanese were launching their own fighters from the seemingly insignificant island of Iwo Jima and were intercepting the U.S. attacks. Something had to be done. The U.S. determined that they must capture and take over Iwo Jima in order to continue with their larger campaign. 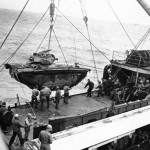 On February 19, 1945, approximately 70,000 United States Marines invaded Iwo Jima. The bloody battle lasted almost a month until the U.S. was ultimately successful on March 16. The gain of the island came at great costs; 7,000 dead U.S. soldiers and an estimated 20,000 wounded. This was a severe cut to the U.S. Forces. 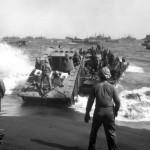 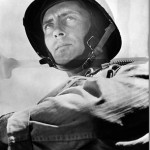 Watch the video clip of the men carrying and posting the flag. The photograph that Rosenthal took was quickly wired around the world and printed in newspapers from coast to coast in the United States. (The photo would later be used as a model for the Marine Memorial at Arlington National Cemetery in Washington, D.C.) The US Marine Corps War Memorial is dedicated to "the Marine dead of all wars and their comrades of other services who fell fighting beside them." Read the Washington Post article to find out more about the story behind the iconic photo. 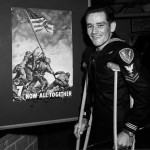 Iwo Jima then became the emergency landing site for over 2,200 B-29 Bombers. This integral base propelled the United States forward and carried them into the next, and last, battle of the Pacific at Okinawa.

Newspapers across America covered the 70th Anniversary and many highlighted interviews with veterans from Iwo Jima. Check out the following articles:

It is at this time that we remember the brave marines who fought this deadly battle. Capturing the island took many days and cost many lives on both sides. Rosenthal’s famous photo of the courageous flag carriers reminds us of the calamity of war and what it took to preserve the value of freedom. 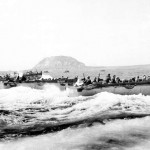 As you read the local newspaper this week, continue to follow the coverage of the 70th anniversary of the victorious Allied battle at Iwo Jima. Pay special attention to the interviews. Compose a list of at least five questions that you would ask a veteran if you were given the opportunity to speak to one.

CCSS.ELA-LITERACY.RH.6-8.7
Integrate visual information (e.g., in charts, graphs, photographs, videos, or maps) with other information in print and digital texts.

CCSS.ELA-LITERACY.RH.9-10.2
Determine the central ideas or information of a primary or secondary source; provide an accurate summary of how key events or ideas develop over the course of the text.