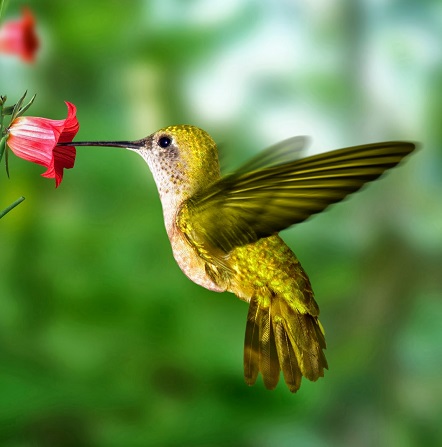 Ninja Warriors of the Sky 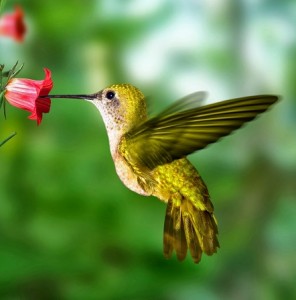 Many scientific discoveries reveal things that are mind-boggling immense: the Higgs-Boson, new exoplanets, or that most dinosaurs were likely feathered, the effects of melting polar ice-caps, our carbon imprint, the Mariana Trench or the human genome.  This week, researchers discovered why the hummingbird, the world’s smallest bird species, has a sweet tooth even though it has no sweet receptors.

Taste is perceived by taste buds on the tongue. Taste buds have receptors called T1Rs. Different T1Rs react to different food molecules, producing taste sensations. Birds have T1R1 and T1R3 receptors—receptors that usually taste savory or umami. This week’s research showed that hummingbirds adapted to allow a pair of T1R1 and T1R3 taste receptors to work together to taste sweetness. It seems a small discovery but it will help scientists understand how hummingbirds and other bird species evolved and is one more piece in the vast evolutionary chain-of-life jigsaw puzzle. It is also a fantastic reason to learn more about a bird that may be tiny but is on the short list of most athletic and amazing creatures. 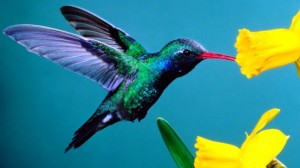 Hummingbirds are the ninja warriors of the sky. They zip quickly through the air using moves unknown to other bird species. You can often hear them but don’t count on seeing them. Their speed makes them difficult to track. Get a peek at hummingbirds in this National Geographic video of hummingbird facts.

Mother Nature designed hummingbirds with several unusual characteristics. Most birds do not have a hummingbird’s moves. Most birds fly forward, up, and down. The ability to hover, to fly backward, and (for brief times) to fly upside down are unique to hummingbirds. So, too, is their appetite for sweets, their trademark thin beaks, and their oddly long tongues. Working in concert, these adaptations help hummingbirds survive.

It is no coincidence that hummingbirds prefer to sip nectar held in dangling, bell-shaped flowers. Hummingbirds need their fancy flight skills and their narrow beaks in order to suck nectar from tubular flowers that hang in the air. Watch an excerpt (8:54 to 12:16) of the NOVA episode Hummingbirds: Magic in the Airto see the special relationship that grows between flowers and hummingbirds. But hummingbirds do not consume only nectar; they also eat insects. Jump ahead and watch a second excerpt (17:07 to 23:00) to see how hummingbirds catch insects and how they handle competition for food. 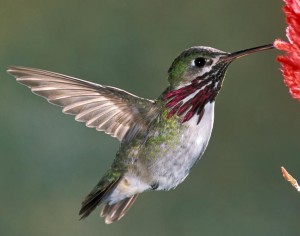 Hummingbirds are fun to watch, but they are also stunning. Hummingbirds—especially males—often sport radiant, iridescent colors. Some especially fashionable hummingbirds wear crests and fancy tail feathers. See photos of some of the 300 different hummingbirds. Click on the first photo to enlarge it and so you can see the bird’s name in the bottom left. Visit Cornell University’s Ornithology Lab to learn more about the most common North American hummingbirds: Ruby-throated, Rufous, Black-chinned, Anna’s, Costa’s, Broad-tailed, Allen’s, Calliope, and Buff-bellied. Click on the Life History tab on each bird’s page to discover more about their nesting habits, habitat, and conservation efforts to protect them. Be sure to listen to the audio files; hummingbirds are not songbirds so their chirps, chatters, and trills sound different than most birds you hear in your backyard.

To escape the cold, North American hummingbirds, like many other birds, take a winter holiday and migrate to Central and South America. The whole journey takes several months as the birds fly south in stages from Alaska or the Northeast.  Many hummingbirds fly the direct route from Louisiana to the Mexican peninsula but that isn’t necessarily the easy route. It’s not a cruise in a plane with snacks, even over-priced ones, and a movie. Instead, hummingbirds endure a 500 mile flight over the Gulf of Mexico against headwinds, with no rest stops or fuel stops, beating their wings up to 4 million times. And, they travel alone. It is remarkable.

The Science of Hummingbirds 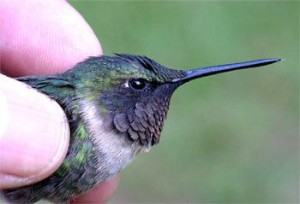 Hummingbirds are known for their aerial skills. And for good reason; their flying abilities are unique and impressive. Watching hummingbirds zip through the air at breakneck speeds is enthralling, but it can be difficult to see exactly what is going on. It is only recently that cameras became fast enough to record their flight and to show us the science behind the hummingbird’s unique flying skills. Watch the BBC video explanation of how a hummingbird is able to hover. More advanced students may be interested in reading the brief Phys.org article, Hummingbird flight an evolutionary marvel.

As you read this week's local newspaper, look for news of the natural world to share and to discuss with classmates. Which animal do you find amazing and why? Cut out words from the front page of the newspaper and write an ode--a poem that celebrates that animal.