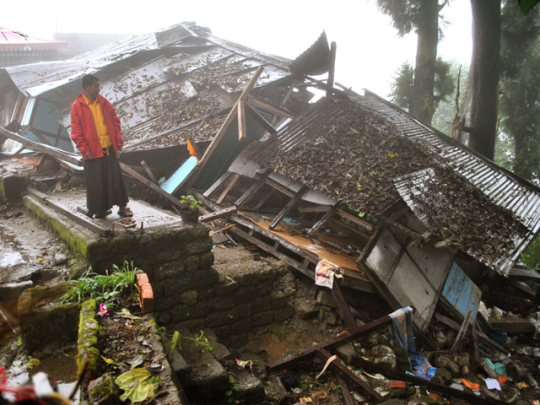 News this past weekend centered on a typically quiet, unobtrusive region in the world. On Saturday, April 25, a magnitude 7.8 earthquake struck the capital city of Kathmandu in the relatively small nation of Nepal. Aftershocks registered as high as magnitude 6.7 and kept occurring repeatedly right up to late Sunday where a 5.3 earthquake erupted just 30 miles from Kathmandu. More than 5,000 have been injured and as of now, continued efforts all over the area search desperately for still-unfound persons who could possibly be buried under the rubble.

Nepal is a narrow region sandwiched between India to the south and Tibet (Autonomous Region of the People's Republic of China) to the north. Probably best known for Mount Everest, the Himalayan Mountain ranges runs along the northern border of Nepal. The Ganges River Basin is located to the south. With this weekend’s deadly earthquake, shocks traveled throughout India, Bangladesh, China's region of Tibet, and Pakistan. The official death toll remains as yet unknown as the injuries and missing persons are yet to be tallied.

Roads and buildings have been demolished, water pipes have been severed leaving limited fresh water to those who are struggling to clear out the debris, the airport has been closed and travel out of the country is nearly impossible, electricity generating stations have been disconnected,  treatment plants have been disrupted, and a general state of mayhem and confusion ensues. Camps have been set up for those who have been displaced from homes and hotels. With the lack of water and electricity and proper sewage treatment, conditions could possibly go from uncomfortable to unbearable quickly. Nepal is one of the world’s poorest countries, with the weak infrastructure that it had in good times now having been demolished, the country will rely urgently on the goodwill of other nations to help it get through this crisis.

Read the Wall Street Journal article, Nepal Earthquake: Rescuers Hunt for Survivors as Death Toll Rises. Follow up with 5 things to know about the Nepal earthquake (USA Today). Continue with the link Nepal quake occurred at major plate boundary (read the article and watch the video).

Learn more about the geographical structure of this massive quake. Read How the Nepal Earthquake Happened (Wall Street Journal) and examine the diagram. Then read and watch the three videos on USA Today’s coverage Nepal quake occurred at major plate boundary (make sure to also click and study the map on this link).  Finally, look at The Washington Post graphic An earthquake felt across South Asia.

Nepal is no stranger to seismic activity. In fact, this territory lies along a geologic region of the earth’s crust where the plates are moving at a relatively fast rate. Seismologists and geologists have expected this level of seismic activity for a long time. In fact, according to Nature International Weekly Journal of Science, Nepal will most likely experience more than 30 more magnitude 5+ aftershocks in the next month or so. Find out more about the history of quakes in this region; read the Wall Street Journal’s Dharahara Tower Then and Now: A History of Earthquakes in Nepal. Then read the BBC’s exploration about how the Nepal quake 'followed historic pattern'.

This seismic natural disaster has taken so many lives, destroyed families, and devastated an entire country and its surrounding countries. It is a nightmare for many who are stuck in this desperate region of the world. Already numerous other nations have sent aid and various groups around the world will surely work to stabilize and restore the region as quickly as possible. But this is all an astute reminder as to the power of the Earth to continue in its natural course despite the wishes, expectations, and efforts of the humans that inhabit it.

As you read the local newspaper this week, continue to follow the aftershocks of this terrible earthquake. Read the stories about how the people who are there have worked hard to survive and recover. Work with other students in your class to brainstorm ways that your class or school can become aware of and possibly help the Nepal disaster scenario.

CCSS.ELA-LITERACY.RST.6-8.5
Analyze the structure an author uses to organize a text, including how the major sections contribute to the whole and to an understanding of the topic.

CCSS.ELA-LITERACY.RST.9-10.2
Determine the central ideas or conclusions of a text; trace the text's explanation or depiction of a complex process, phenomenon, or concept; provide an accurate summary of the text.

CCSS.ELA-LITERACY.RST.11-12.2
Determine the central ideas or conclusions of a text; summarize complex concepts, processes, or information presented in a text by paraphrasing them in simpler but still accurate terms.